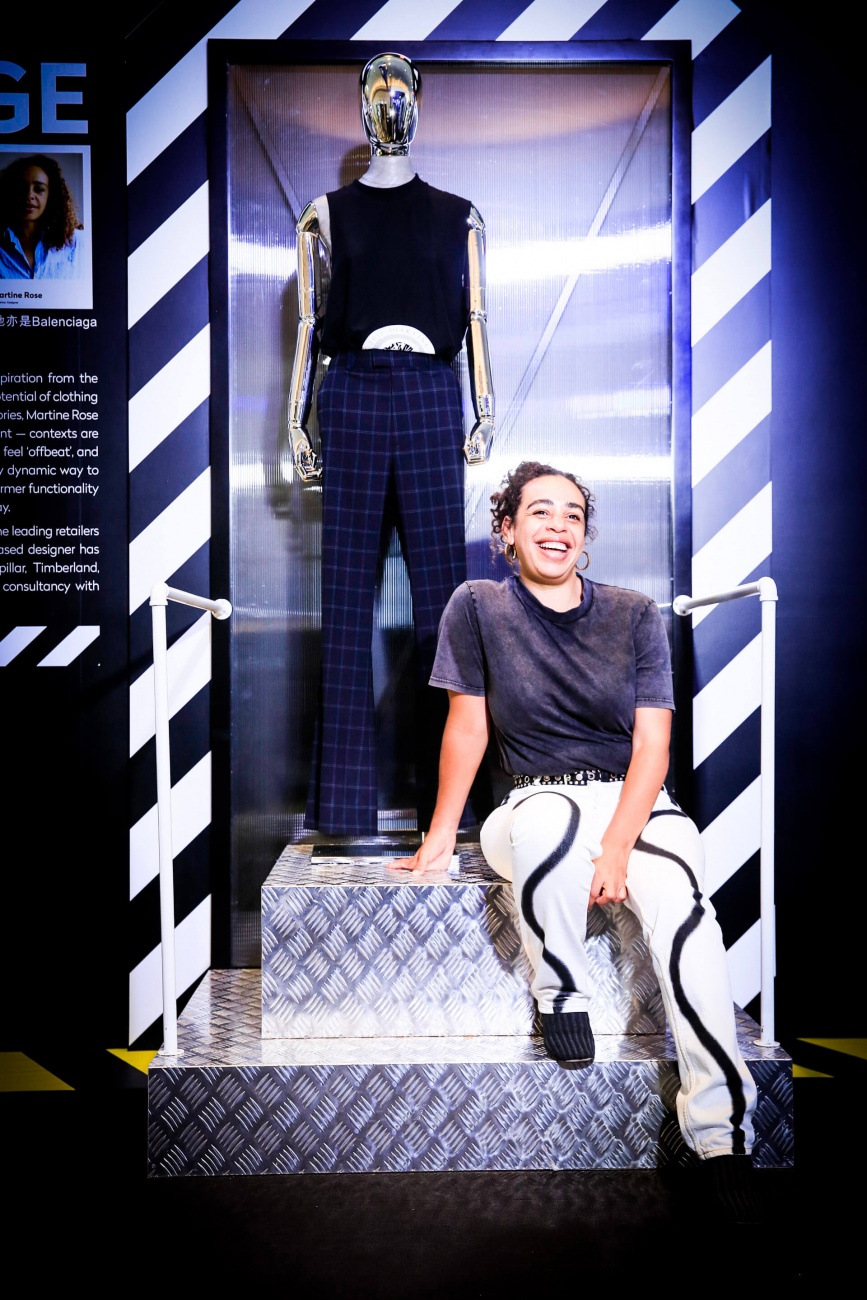 Last weekend a panel of expert judges, including British designer Martine Rose, came together to crown the winner of the Hong Kong Young Designers’ Contest (YDC) 2018. Leo Chan, designer of Wandervögel, took home top prize for his futuristic collection of men’s wear, which immediately caught the eye of Rose, who happens to be one of industry’s hottest men’s wear designers.

When Rose founded her label in 2007, her approach was far from mainstream. Her shows were unconventional and ranged from installations and short films to showings at indoor markets and rock climbing walls. Then there were her somewhat extreme collections which experimented with notions of masculinity, traditional workwear and subcultures.

“I am not sure I have a singular vision, I have themes I want to explore and my expression is through the lens of men’s wear. I hope when people pick up my clothes they get more than a product. I always want to evoke a sense of otherness and emotion. I want my clothes to be a little undone, warm and thoughtful,” she says.

A decade on and Rose is now considered one of London’s most exciting designers. Aside from her own brand, she works as a consultant with of-the-moment designer Demna Gvasalia of Balenciaga, while her label has is now stocked at prestigious retailers worldwide.

So what is the secret behind her success?

“It’s always about telling a current story and nostalgic one. As long as you’re mixing elements of nostalgia and looking forward, you’re on the right track. It’s also essential for a designer to have an identifiable style,” she says.

“I love looking at students and graduates work. I find it very energising and optimistic. At the Young Designers’ Contest I was so impressed with the craftsmanship and effort they all put in. Every single stitch they’ve put in is considered which is vital,” she says.

Rose is quick to acknowledge the growing challenges designers face today, especially with the prevalence of social media.

“The challenges looking ahead aren’t necessarily new, but they are continuing. It’s tough for students to try and find their own voice and way of communicating. The influence of other designers is hard to avoid with social media.

“It’s also integral that a designer be able to find good partners to work with for the long-term. If you look to build trust with factories and suppliers, it really goes a long way later. I wouldn’t be here today unless I made those relationships with people.

“It’s also important that they try to work within their means. Don’t rush and give yourself time and be patient. You don’t have to do everything now. It’s nice to be successful early but that comes with negatives.

“Finally, everyone needs to grow a thick skin. Criticism is everywhere but there’s a difference between comments from someone in the industry who is trying to help you, as opposed to someone who is just bashing you. You have to learn the difference,” she says.

KEYWORDS
MartineRose / menswear / YDC2012 / YDC2018 / youngfashiondesigner
CLOSE
I confirm that I have read and agreed with FASHIONALLY’s Terms of Use and agreed that the above information may be used by the Hong Kong Trade Development Council (HKTDC) for incorporation in its database for sending FASHIONALLY newsletter. I understand that HKTDC’s policies and practices in handling my personal data are set out in HKTDC’s Privacy Policy Statement.
CONFIRM
Thank you for subscribing to our newsletter. A confirmation emaill will be sent to you shortly. If you no longer wish to receive any news from FASHIONALLY, please contact us at lifestyle@hktdc.org.
CONFIRM
Unsubscribe failed. Please contact us.
CONFIRM
You have successfully unsubscribed.
CONFIRM
CONFIRM
Page rendered in 1.1901 seconds. CodeIgniter Version 3.0.4